The various research areas along with published papers are given in each submenu.

Some key areas involve the following: 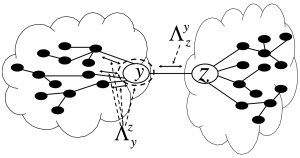 An example of a frame, consisting of three subframes, is depicted for each one of the nodes a, b and c, transmitting under all three policies. Each subframe consists of three slots (0-1-2 , 3-4-5 , 6-7-8 respectively). Slots marked with X are the ones assigned to each node by the Chlamtac-Farago algorithm. Slots marked with p are the slots during which each node may transmit under some probability. The slots during which the node is never allowed to transmit were left blank. 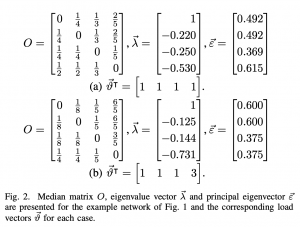 The median matrix captures the median problem such that the smallest of principal eigenvector elements correspond to the solution of the problem.

A path Pr(u) from node u to sink, impotence of nodes, along the path, and impotence of the entire path. Dynamically change the path as nodes’ batteries are gradually depleted to avoid the energy hole problem. 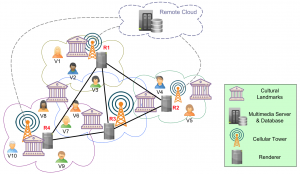 Game data flow in cloud/fog gaming system, where the game client sends commands to the cloud game server and the server responds with update actions rendered by the appropriate fog game renderer and streamed back to the client for display.

An example of vehicles (Nodes) moving to opposite directions under VeMAC protocol. Nodes 3 and 4, moving towards opposite directions, become aware of occupied under VeMAC time slots by their two-hop neighbors and they randomly choose one of the non-occupied to transmit (and declare as occupied). The depicted time slots sets are different for each direction. Applying Time-Independent MAC policies may improve time delay and under certain conditions provide for guaranteed time constraints that are important for safety application in vehicular environments. 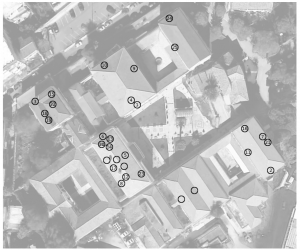 The positions of the Ionian University’s demo nodes from a satellite view, indicated by circles.